“Shieldmaidens are tough melee Vikings. They're strong against most opponent types, but deal only half damage to Walls.”

The Shieldmaiden is an Event Troop from Valhalla Awaits Events, Chest, or Sales that can be used as Troop Tactics. 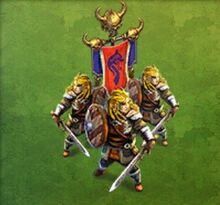 Female warriors were an important part of Norse folklore and mythology. The shield maiden figure was associated with the valkyrie, a dread female spirit who chose which warriors would live or die in combat. In the Icelandic Volsunga Saga, Brynhildr appears in both roles, mortal shieldmaiden and heavenly valkyrie. A shieldmaiden's arms of choice would have been the sword and shield and her main tactic would have been to charge headlong in battle. Like the Greeks, the Vikings considered ranged troops like slingers and archers little more than a nuisance who softened up the enemy before the decisive melee.

Retrieved from "https://dominations.fandom.com/wiki/Shieldmaiden?oldid=48212"
Community content is available under CC-BY-SA unless otherwise noted.