“A specialist troop that sneaks through gates to destroy defensive buildings. Their superior training makes them tougher and harder-hitting than Ninjas, allowing them to survive enemy troops more easily. However, this extra training costs more, and makes them more vulnerable to spike traps than their more plentiful counterparts.”

The Shinobi is an Commandos Event Troop from the Ninja Dojo Event Building, "Enter the Ninja" Events, Chest or Sales that can be used as Troop Tactics. 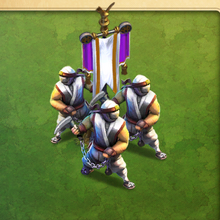 Shinobi, or ninjas, were spies and assassins employed by the lords of pre-modern Japan. Unlike the ostensibly chivalry samurai class who hired them, shinobi accomplished their goals by any means necessary, including the use of stealth, poison and disguise They learned their specialized set of skills, known collectively as ninjutsu, at dedicated schools with centuries of tradition. There were also female shinobi called kunoichi who performed missions of espionage and assassination.

Retrieved from "https://dominations.fandom.com/wiki/Shinobi?oldid=47188"
Community content is available under CC-BY-SA unless otherwise noted.