“Collect a Satellite Scan tactic once per day that disables enemy traps!”

The Space Shuttle is one of four Wonders unlocked in the Space Age. 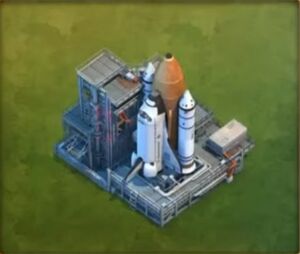 The 1960s saw many firsts in human spaceflight, from Yuri Gagarin's orbit in 1961 to the Apollo 11 moon landing in 1969. But these incredible feats had a serious limitation: their spacecraft were lost after a single mission. Therefore, President Nixon asked NASA to come up with a reusable spacecraft. The result became known as the Space Shuttle.

The initial test craft was dubbed the Enterprise after the starship from the TV series Star Trek. Only five shuttles were ever launched: first the Columbia in 1981, then the Challenger, Discovery, Atlantis, and Endeavor. Though the Columbia and Challenger are now best known for the disasters that befell them, the program was a great success overall. In particular, shuttles were essential in constructing and maintaining the International Space Station. Since the shuttle program ended in 2011, the space station has been supplied entirely by Russian Soyuz rockets.

Retrieved from "https://dominations.fandom.com/wiki/Space_Shuttle?oldid=54617"
Community content is available under CC-BY-SA unless otherwise noted.