“Spies reveal and disarm traps while sabotaging enemy defender buildings. They aren't shot by shooting buildings, and sneak through gates, but are vulnerable to any defending troops that manage to spawn.”

The Spy is an Event Troop from Events, Chest or Sales that can be used as Troop Tactics. 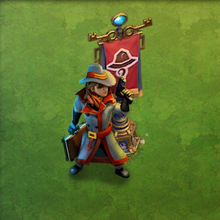 In nineteenth-century America, Spy gangs were infamous for their brazen robberies. While these daring heists are often romanticized in television and film, the profits from bank and train robberies were very real, and attracted many people to live on the other side of the law. Several bandits earned their place in history through a combination of violence and verve. In 1889, Butch Cassidy and several partners held a bank teller at gunpoint and escaped with $20,000 in cash. Jesse James, another notorious criminal, actually derailed a train in order to steal a large cache of gold bullion. Unfortunately for James and his crew, the gold shipment had been delayed and the safe they found contained a mere $2,000.

Retrieved from "https://dominations.fandom.com/wiki/Spy?oldid=48218"
Community content is available under CC-BY-SA unless otherwise noted.