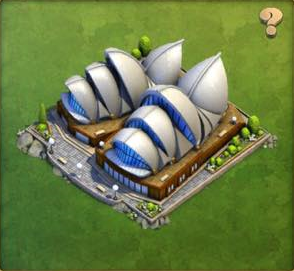 The Sydney Opera House is one of four wonders unlocked in the Atomic Age.

The Sydney Opera House is one of the most iconic buildings of the 20th century. Located on Bennelong Point in Sydeny Harbor, the expressionist design resembles a series of overlapping shells. Danish archiect Jorn Utzon created the original concept and oversaw construction from 1957 to 1966. While its great potential was recognized right away, delays and rising cost caused political controversies which led to Utzon's bitter resignation. The Australian Peter Hall took over and managed to guide the project to completion, despite finding that many of the finer details had never quite been worked out. The opera house finally opened in 1973 with a ceremony led by Queen Elizabeth Ⅱ.

Retrieved from "https://dominations.fandom.com/wiki/Sydney_Opera_House?oldid=54619"
Community content is available under CC-BY-SA unless otherwise noted.