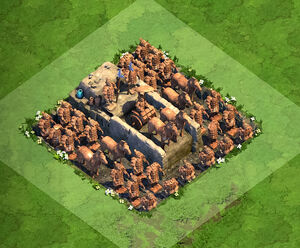 “Allows you to summon the Terra Cotta Army once a day. Increases the health of nearby Castles and Barracks.”

The Terra Cotta Army is one of four wonders unlocked in the Classical Age.

The Terra Cotta Army is a collection of some 8,750 life-size statues of warriors, chariots and horses that were buried with Qin Shi Huang, the first Emperor of China, to protect him in the afterlife. Qin died in 210 BCE, and was interred in a tomb near Mount Li, a mile away from the figures. The army was manufactured in workshops nearby. Constructed of clay, the figures' arms, legs, torsos and heads were separately created in molds and then fired and assembled. The figures were painted terracotta. Hence the name terracotta army and equipped with real weapons, but over time the paint has faded and the weapons had been stolen or rotted.

Retrieved from "https://dominations.fandom.com/wiki/Terra_Cotta_Army?oldid=57339"
Community content is available under CC-BY-SA unless otherwise noted.