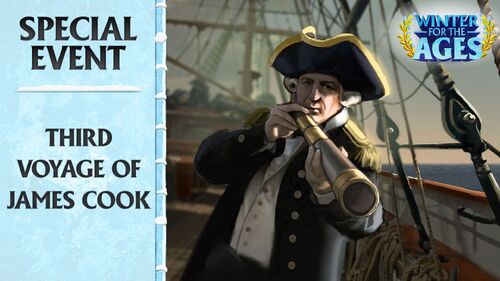 James Cook began his third voyage in July of 1776, traveling from Plymouth, England. Stopping briefly in Cape Town, South Africa, Cook and his crew set sail aboard two ships, the Resolution and Discovery, and set course for the Pacific Ocean.

While the goal of the voyage was ostensibly to return a man named Omai to his home in Raiatea (An island in Polynesia), in reality it was seen as a chance to search for the Northwest Passage, the term used for a route between the Pacific and Atlantic oceans in the northern hemisphere. After returning Omai to his home, Cook and his crew continued north, where they became the first Europeans to travel to the Hawaiian Islands, which they called Sandwich Islands. Afterwards they went north - exploring the northern coast of California, Canada, and Alaska - continuing all the way to the Bering Strait.

Unable to find way north, Cook and his crew returned to Hawaii, where tensions between native people and Cook's crew led to Violence. In February of 1779, Cook attempted to take Hawaiian king, Kalani'opu'u, hostage and was killed, along with several of his crew. The surviving crew members returned to England, arriving in the fall of 1780. Can you avoid James Cook's deadly fate and collect trade goods from many different nations? 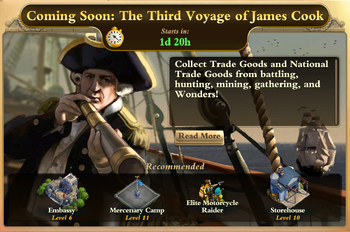 Retrieved from "https://dominations.fandom.com/wiki/The_Third_Voyage_of_James_Cook?oldid=45570"
Community content is available under CC-BY-SA unless otherwise noted.