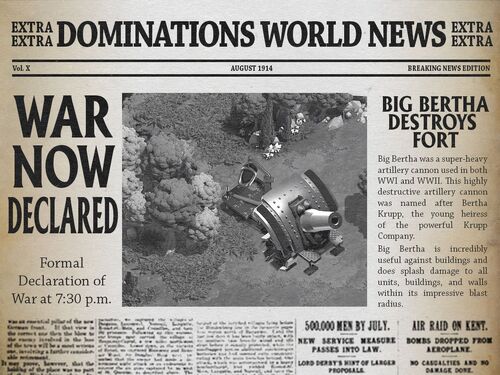 The M-Gerat, commonly referred to as “Big Bertha”, was a German siege howitzer used during World War I. On August 2nd 1914, the Big Berthas, were organized into a battery and sent to the Western Front, accompanied by 240 men. This Battery was the first to be sent into battle to bombard the Fort de Pontisse, one of twelve forts built in the late 19th century in Belgium. The fort surrendered after just 2 days. The battery then moved to Fort de Liers, but they surrendered before the battery had even finished emplacing.

The name Big Bertha came from the German soldiers naming the gun “Dicke Berta” in reference to Bertha Krupp, head of the Krupp family, a prominent 400 year old German dynasty from Essen. 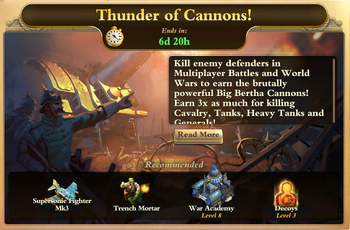 Retrieved from "https://dominations.fandom.com/wiki/The_Thunder_of_Cannons_Event?oldid=43635"
Community content is available under CC-BY-SA unless otherwise noted.