“Tomoe Gozen deals immense cone damage with her naginata, decimating enemy troops! When Gozen's hitpoints are reduced to 0, she will dismount her horse, fully regaining her health!”

The Tomoe Gozen is an Event Troop from Events, Chest or Sales that can be used as Troop Tactics. 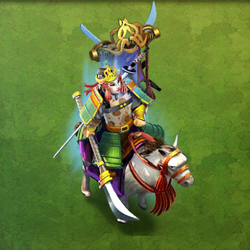 Tomoe Gozen act like a General on the battlefield with very high hitpoints and damage but with a melee range. She has a high advantage when fighting other Generals in battle.

According to the Tale of the Heike, Japan’s great feudal war epic, the warrior Tomoe Gozen was worth a thousand ordinary soldiers. She fought for Minamoto no Yoshinaka in the twelfth-century Genpei War, a conflict between the aristocratic Taira and rough rural Minamoto clans. While most women trained with the naginata polearm and only fought on defense, Tomoe wielded a sword and bow as she accompanied Minamoto on campaign.

Her most famous incident occurred at the Battle of Awazu in 1184. Yoshinaka’s heavily outnumbered forces had been scattered and reduced to a mere handful, with the redoubtable Tomoe being one of the surviving few. When the general ordered her to flee, she reluctantly agreed to do so, but only after slaying a renowned enemy warrior in single combat. Accounts differ as to her final fate: she may have ended up a Buddhist nun, or walked into the sea and drowned. She is remembered in modern Japan as a paragon of loyalty and valor.

Retrieved from "https://dominations.fandom.com/wiki/Tomoe_Gozen?oldid=51782"
Community content is available under CC-BY-SA unless otherwise noted.