“deploy Paratroopers onto the battlefield from above. Paratroopers do not cause enemy defenders to spawn. Tap anywhere to designate the drop location. Transports must wait to load more troops before they can be re-deployed.”

Transports are the third type of air unit to use in the game DomiNations. They're unlocked by upgrading the Airstrip to level 3 in the Global Age.

Transports airplane's AI is to fly to the target area from the nearest perimeter, drop Paratroopers, and then fly back to where it came from. It can be used repeatedly through the battle if it is not destroyed. Though it will take a few moment cooldown, before the Transports airplane can be deployed again.

Transports airplane takes 3 Air Space. It has 30s deployment cooldown (without upgrade) and deploys 3 Paratroopers at the target area each time it runs.

The Paratroopers, once deployed, will attack the nearest building. Against Town Centers, they deal 85% less damage.

They won't trigger most enemy defenders to spawn; they only spawn the following: Generals, troops via hidden traps, and troops spawned via the signal flare). For clarity sake, they do trigger all traps.

From Heavy Transports above, Transports deploy Airborne Infantries instead of Paratroopers; this is only a name change. 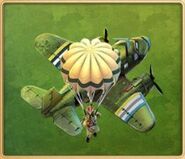 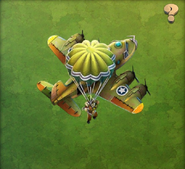 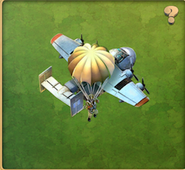 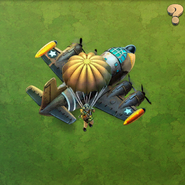 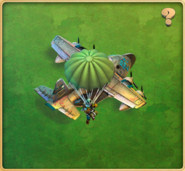 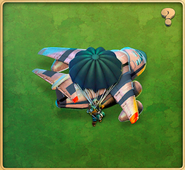 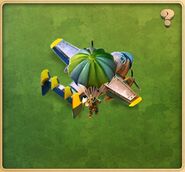 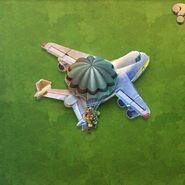 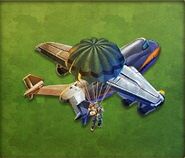 Vanguard Transport
Add a photo to this gallery

The Aviation Technology at the Library confers this bonus to the Transports:

The Elite Paratroopers Technology at the Library (Level 10 technology) confers the following bonuses to the Transports:

Amelia Earhart at the University confers the following bonuses to the Transports:

Retrieved from "https://dominations.fandom.com/wiki/Transports?oldid=56335"
Community content is available under CC-BY-SA unless otherwise noted.