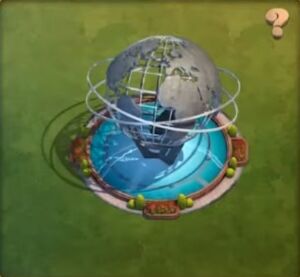 “Generates Rubies once per day. Deploys your highest level defensive Coalition Army when destroyed on defense.”

The Unisphere is one of four Wonders unlocked in the Space Age.

New York City's 'master builder' Robert Moses brought the World's Fair back to Queens in 1964. The exhibitions promised a utopian future, touting the wonders of rocketry, plastics, and nuclear power. Walt Disney's animatronic dolls sang 'It's a Small World' and the Beatles gave a concert in nearby Shea Stadium. Even the pope got involved, coming to bless the crowds and allowing Michelangelo's Pieta to be put on public display. The fair gave much-needed optimism to a nation still reeling from the assassination of President Kennedy five months prior.

the great symbol of the event was the massive steel Unisphere. Standing 140 feet tall and measuring 120 feet in diameter, it is the largest representation of the Earth ever made. The surrounding rings represent the orbits made by Soviet cosmonaut Yuri Gagarin, American astronaut John Glenn, and Telstar, the first active communications satellite. The sphere's construction was a marvelous technical feat that was only made possible by calculations done on electronic computers, quite an advanced piece of civilian technology at the time.

Retrieved from "https://dominations.fandom.com/wiki/Unisphere?oldid=54615"
Community content is available under CC-BY-SA unless otherwise noted.