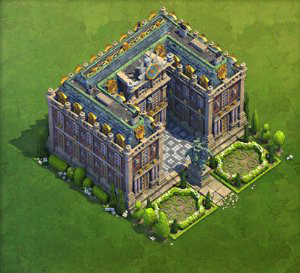 “Slows down nearby invading armies and provides a health bonus to your own troops.”

The Versailles is one of four wonders unlocked in the Gunpowder Age.

The Palace of Versailles is a French royal palace complex located in a suburb of Paris. Construction began on the palace and gardens in 1664 and continued in stages through 1710. Subsequent monarchs continued to enhance and renovate the structures until the Revolution in 1789 (when France pretty much ran out of monarchs). After the Revolution, Versailles served a number of lowly purposes until it was turned into a museum in 1837. Versailles is a staggeringly beautiful structure. The building's wonderful halls and ballrooms, stunningly appointed living quarters and extensive elegant gardens have awed visitors - royalists and Republicans alike - for centuries, leading us to the inescapable conclusion that indeed 'it's good to be king.' However, the palace has no bathrooms, as back when the palace was in use, there were no toilets, and people 'did their business', by peeing and pooing in chamber pots in private rooms. Servants would dump the 'waste', out the windows, leaving the palace stinky only prevented by the flower gardens.

Retrieved from "https://dominations.fandom.com/wiki/Versailles?oldid=45337"
Community content is available under CC-BY-SA unless otherwise noted.