“Vikings are tough melee units that excel against most opponent types, but they only deal half damage to walls.”

The Viking is an Event Troop from Summer for Ages Events, Chest, or Sales that can be used as Troop Tactics. Vikings are melee ranged infantries with high dps and no target preference. They are best in taking out Buildings and defenders but have a weakness when breaking a wall. 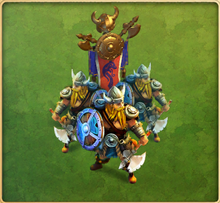 The Vikings were seafaring warriors who began their reign in Europe during the 8th century AD. Vikings had originated from Scandinavia but decided to leave their home due to overpopulation and a lack of natural resources. In order to find riches, the Vikings built longships that would enable them to sail swiftly throughout Europe and across the Atlantic. They used their advanced longboat technology to quickly raid and loot unprepared victims along the European coast. Their ruthlessness instilled fear throughout the European continent, compelling Frankish rulers to pay the Vikings handsomely to ward off their attacks. For three centuries, the Vikings would dominate much of Britain and Europe. By 1066 AD, the Viking Age had ended, with most Scandinavians converting to Christianity and assimilating into a Christian Europe.

Retrieved from "https://dominations.fandom.com/wiki/Viking?oldid=48231"
Community content is available under CC-BY-SA unless otherwise noted.