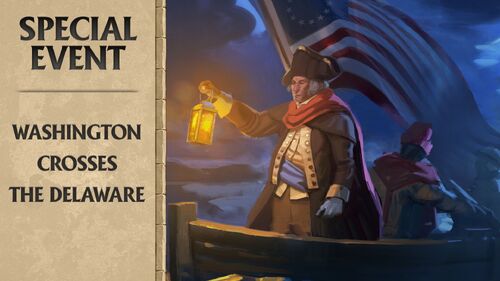 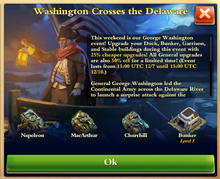 General George Washington led the Continental Army across the Delaware River to launch a surprises attack against the Hessian forces in Trenton, New Jersey on the night of December 25-26 in 1776, during the American Revolutionary War.

The original attack plan actually included three separate river crossings with the two other forces led by Col. Cadwalader and Gen. James Ewing. However, only Washington’s force made it across the icy river.

Col. Johann Rall at Trenton was said to have acknowledged receipt of intelligence gathered from British spies about the attack. A series of false alarms compounded by the growing story gave Rall and the Hessian forces a sense that no attack was likely that night, setting the stage for Washington’s historic victory.

Retrieved from "https://dominations.fandom.com/wiki/Washington_Crosses_Delaware?oldid=45190"
Community content is available under CC-BY-SA unless otherwise noted.