Lower hitpoints than other tanks, Vulnerable to ballistas

“This swift tank is faster than other heavy tanks and deals substantial damage with its powerful machine guns!”

Whippet Tank is an Event Troop from Events, Chest or Sales that can be used as Troop Tactics. 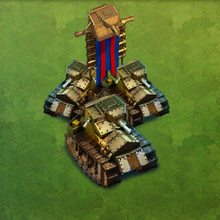 Throughout most of World War 1, Allied generals continued to place their faith in punching holes through enemy lines that could then be exploited by cavalry on horseback. This was despite accumulated experience with the capabilities of the machine gun and the common “defense in depth” doctrine that would have turned any such cavalry action into a bloodbath. Eventually, British strategists realized they needed a light, fast armored vehicle that could disrupt enemy movement, supplies, and communications in rear areas after heavy tanks and infantry had broken through the front line trenches. At half the weight and nearly twice the speed of previous heavy tanks, the Medium Mark A Whippet Tank fulfilled their specifications. Although the tank lacked a rotating turret, its four Hotchkiss machine guns provided 360 degrees of fire, and the simpler steering mechanism meant that only three crewmen were needed to operate the vehicle.

By the end of the war, 200 Whippets were built. They saw heavy action in the Battle of Amiens in August 1918, also known as the “Black Day of the German Army.” The Whippets that broke through the front lines managed to destroy or capture the artillery for an entire sector - a critical contribution to the blowout victory that marked the beginning of the end for Germany’s war effort. During that battle, one individual tank with the name “Musical Box” managed to penetrate deep into the enemy’s rear, where it spent nine hours wreaking havoc before eventually being disabled.

Retrieved from "https://dominations.fandom.com/wiki/Whippet_Tank?oldid=52105"
Community content is available under CC-BY-SA unless otherwise noted.