World War is a feature that was added in the Version 3.0.150 update. It allows demonstration of your Alliance by waging war against rivals to stake your territorial claim on World Map. Construct a Command Post to pack full of loot as you reap the spoils of war. Design a war base and save multiple unique layouts to test your might. Conquer the globe on an epic scale with matchmaking up to 50 VS 50.

To be part of the World War, you'll need to have these prerequisites:

Only leaders and co-leaders can start a World War

World War is a two-day struggle between two alliances for global domination. The alliance that earns the most stars will be victorious. Earn some loot immediately during battles and acquire bonus war loot for winning battles at the end of the war. If both alliances tie, then the one with the highest average destruction wins.

Donate troops and troop tactics to War Bases for extra defense during the entire war. War Bases defend using the same buildings found in your town. They can be arranged separately and keep the resources in your town completely safe during a war. During this time you can alter your base, donate troops, form offensive and defensive coalitions, & research at the library and blacksmith.

Combatants make their two best attacks against the enemy alliance. You cannot use both attacks on the same base, but two different people can attack the same base. Earning stars is important! Wonder replacements, revolutions, and editing your War Base during War Day will not take effect until the next war. Building under upgrade will be available at pre-upgraded level during world war.

War attacks do not affect medals or peace treaties. Blessings in your town have no effect on War Bases or war attacks. The highest level General will automatically defend the Castle on a War Base. When you attack, you can keep the loot you get, but as a defender, you never risk your own treasures earned elsewhere in the game.

Once the war is over, there is a five-minute grace period to allow any active battles to be completed. Your war loot will be delivered to your Command Post after the grace period. The winning alliances will receive all of their war loot. The losing alliance only receives a small portion for their efforts. You can see a detailed view of the war by hitting the report button. 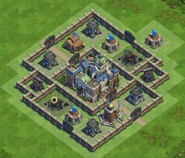 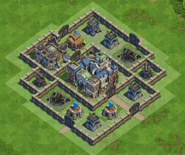 In 2021 a new feature was added, Friday Night Fights. This feature allows to sign in using a form to ask to match against a specific alliance for a specific "Round" of a "Season".

The guts may be fake, but the glory is real; declare WAR against any alliance you choose in a forced match! You pick your opponent; you select your war size; you control any war limitations you want to use. Every two weeks BHG will match actual alliances for real wars during each Season of Friday Night Fights. Share the excitement of your battle in the #fight-night channel and earn some extra in game rewards!

Make sure to attack with a full army, tactics and troops tactics if needed. If you formed offensive coalition(s), then don't forget to deploy them too.[]

0SH is a player initiative that prescribes:

Alliances which pledge to abide by these rules include “0SH” in the Alliance Description. A War opponent is expected to follow the same rules in a match with honor.