“These mounted archers swiftly move around the battlefield to eliminate enemy defending troops.”

The Yumi Samurai is an Event Troop from Yabusame! Events, Chest or Sales that can be used as Troop Tactics. They can be trained at Samurai Stable to be used as Troops. They are called Yumisame. They are mounted archer units. 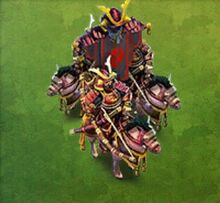 When the samurai class first arose, their quintessential weapon was not the katana, but the yumi bow. The yumi is distinctive for its height and asymmetry. It is considered the world's longest bow and stand much taller than its wielder. Unlike most bows where the arrow is notched in the middle, the yumi's is on the lower third of the bow. The exact purpose of this unusual construction is not certain. One theory is that the short lower limb allows it to be used while mounted, as the early samurai did.

Retrieved from "https://dominations.fandom.com/wiki/Yumi_Samurai?oldid=48240"
Community content is available under CC-BY-SA unless otherwise noted.