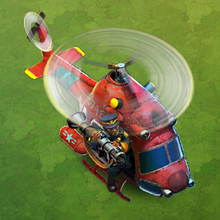 “General Zhukov deals significantly more damage than other generals in exchange for lower health. Hanging from his MIL-Mi-2 Helicopter, Zhukov's bazooka shots inflict massive damage to his target and enemies around them.”

Zhukov is the 10th General available to players, unlocked after upgrading the Castle to level 8 in the Space Age.

Georgy Zhukov was the man who led the Soviet defense against Nazi Germany. He rose through the ranks and eventually assumed his first major command in 1939 at the Battle of Khalkhin Gol, where he drove the invading Japanese forces out of Mongolia. By 1942 he sat at the head of the Red Army.

Zhukov's study and application of modern military theory made him more adept than any other Russian commander. He also led the Soviets to their greatest victories: Leningrad, Stalingrad, Kursk, and the final drive to Berlin in 1945. In recognition of his achievements, he was chosen personally accept the German surrender on behalf of Stalin.

Zhukov was successful in his ability to stay in the good graces of the mercurial dictator. Having survived the Great Purge of the late 1930s, he avoided Stalin's jealousy long enough to win the war. But his legendary status made Zhukov an apparent threat. He was shipped off to a minor command in 1946, and after helping Nikita Khrushchev take power in 1953, he fell in and out of favor with the new party head. However, upon his death in 1974, he was given a grand funeral and honored as one of Russia's greatest military heroes.

General stats are without Library and Wonder benefits.

Retrieved from "https://dominations.fandom.com/wiki/Zhukov?oldid=57458"
Community content is available under CC-BY-SA unless otherwise noted.